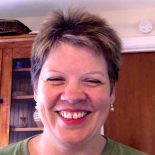 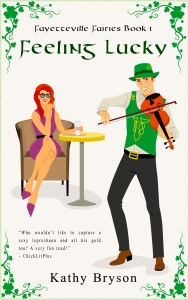 “So how much is it then?” The sick feeling in the pit of my stomach rose to the back of my throat. I swallowed hard, trying to force it back down. The timing of all this bothered me. The wedding was on Saturday, the money was moved over the weekend, and I won the lottery on Monday… but that had to be a coincidence. No way were leprechauns involved!

Mr. Gallagher shook his head. “Well, there are taxes of course and the management fees. And not everything is a cash asset. There are several properties, and it appears some businesses…” Mr. Gallagher paused and shuffled through his papers again.

Mr. Gallagher blinked. “About five million, I think. As near as I can figure, and this is a rough estimate, of course…”

Five million. The same amount mentioned by the crazy guy in the diner. The same guy whose ass I’d grabbed Saturday evening. The same guy who’d accused me of stealing his fortune just now, his five million dollars just now. A curious fuzzy feeling swept over me, and the lights in the room grew suddenly brighter.

I’d like to say I fainted, that I swooned delicately from the shock. It wouldn’t be very feminist, but better than the reality. Actually, I threw up all over the floor of Mr. Gallagher’s office. The carpet could probably be cleaned though. I’d only had coffee that morning.

Maggie O’Donnell proved exactly how good a supervisor she was at that moment and hurried in with a glass of water and some damp paper towels. Mr. Gallagher sat in sputtering shock. Maggie shooed everyone away and tried to get me to sit for a minute, but the only thing I wanted was out of there. I stumbled to the front door of the bank and started down the sidewalk, staggering like a drunk.

Of course, that guy in the diner wasn’t a leprechaun. That would be stupid. I’d just gotten lucky – really, really lucky. Somebody must have screwed up, doing some late-night bookkeeping over the weekend. Well, too bad! That money was mine now. I was going to have so much fun with five million dollars.

I wobbled across the sidewalk, the sick feeling lurching in my stomach. Five million dollars. Do you have any idea what the tax consequences of five million dollars are? The whole thing was too crazy. Just go back to the diner and have some breakfast. Yep, breakfast, I would feel so much better with breakfast. The rest of it could wait. It wasn’t that big a deal anyway. I felt better already, just being outside in the fresh air. Nope, nope, not going to think about it,I told myself and traced an erratic path back to the diner, talking myself into as much denial as I could grab.

Once there, I took a deep breath before entering. The so-called leprechaun was nowhere in sight. My mother and Mrs. Carmichael still sat in a booth toward the back. Sliding in beside Mom, I smiled brightly. “Sorry about that. Thanks for waiting.”

My mother raised an eyebrow, but before she could say anything, the busboy returned and interrupted.

“Um… ‘scuse me, but you ordered tea?” He grinned apologetically and shrugged to indicate the tray of plates he held in one hand and the teapot he held in the other.

My mother stood up, took the tray, and started unloading it. The busboy had outdone himself. Every plate held a different pastry and all of them looked delicious. I suddenly realized that I hadn’t eaten anything that day except coffee, and of course, I didn’t have that any more. “It’s lovely, dear,” My mother told the busboy as he put down the teapot, and he went away happy.

“I timed that right, didn’t I?” I took a cream pastry from the offerings. My hands shook slightly. I needed some sugar badly!

“What did the bank have to say?” Mrs. Carmichael’s interest was transparently arch, and I tried not to laugh out loud.

“Oh, just some paperwork. Did I tell you I won the Fergus lottery?”

“Yes,” my mother said quietly. “We heard the Queen.”

I laughed. “Can you believe that guy? He thinks he’s a leprechaun.”

I started to laugh but choked on apple filling. My mother obligingly reached over and patted me on the back. Then I wiped my streaming eyes. “Good one, Mom. But don’t be mean. He’s not that short.”