Between work and life and other assorted interruptions this year, I didn’t get as much writing done as I planned. I could see the necessary break looming, so I just went with it and spend the year exploring other aspects of publishing.

I use Draft2Digital for self-publishing as I like their ease of use and was pleased when they partnered with FindawayVoices. It’s still relatively new, working out some kinks, but here’s hoping it’s a viable alternative.

I worked with Nicholas Barta who was unfailingly cheerful and on top of his game, which was good because it’s hard to keep track of multiple files. The really embarrassing part was when I discovered not 1, but 3 errors in the original manuscript!

So, reviewed and polished once again, Giovanni Goes To Med School Audio is Now Available on: 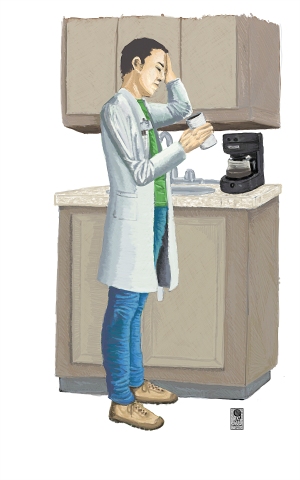 Jose Garcia did a great job adding pictures to Giovanni Goes To Med School. His sketches captured the feel of a baffled med student and his confused, irascible zombie!

Jose has degrees in science and art and specializes in scientific illustration – http://josephagarcia-mis.wixsite.com/mysite – which actually works well for illustrating books. “Much of my art is taking a concept, simple or complex, and turning it into pictures so others can see exactly what I am thinking.”

This project let Jose “explore sci-fi art.  Let’s just hope the zombies stick to Geo – not sure if my family would be too thrilled if I earned a degree in the undead!”