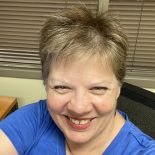 I’m having so much fun reading about new releases from the BroadUniverse ladies and sharing them here, but Lauren Hill’s efforts stood out because she actually learned to drive a steam engine for her latest! Here to tell us about all the effort behind The Engine Woman’s Light is Lauren.

How much research do you do and where do you get your information?

The amount of research depends upon each story and world I create. The Engine Woman’s Light took a tremendous amount of book, video, museum and hands-on research, over ten times as much as my first novel, Heroes Arise. For The Engine Woman’s Light, I spent only a minor portion of my research time on the internet, often to glean details regarding speech, mannerisms and attire in nineteenth-century California. Road trips, plus memories of adventures in my twenties and thirties, helped me set my vivid scenes. Naturally, I learned how to run a steam locomotive: hands-on with grime on the hands!

I remember delving into the archives of New York City’s library, searching for steam locomotive instructional materials. Some booklets I discovered were nearly a century old. I interviewed engineers and firemen of vintage steam locomotives and even rode with some of them in their engine cabs. After interviewing a boiler mechanic for the Skunk Train (Fort Bragg, California), I climbed into the cold locomotive firebox under repair and perused the equipment’s internal anatomy. I visited many museum railroad displays, including those at the California State Railroad Museum in Sacramento and the Smithsonian in Washington, D.C. Finally, the Golden Gate Railroad Museum in California provided me the opportunity (under close supervision) to engineer steam locomotive SP 2472 for almost an hour. What a thrill!

What inspired this book?

I have a lot of crazy dreams and one inspired me to create The Engine Woman’s Light. In that dream, an elderly woman rode a train to a disreputable asylum for thrown-away people. An attendant asked her to babysit an infant. Then the ghost of her husband revealed the foundling was their illegitimate great-granddaughter. The woman needed to flee the train, baby in tow.

I spent twenty years trying to transform that idea into a workable novel. Somewhere along the way, I chose a spirits-meet-steampunk setting in an alternate nineteenth-century California. The Engine Woman’s Light focuses on Juanita, the rescued great-granddaughter, who ultimately fights to prevent the clandestine murder of asylum inmates. Yet to save innocent lives, Juanita must take lives of the corrupt. How can she reconcile her assignment with her belief in the sacredness of all human life? 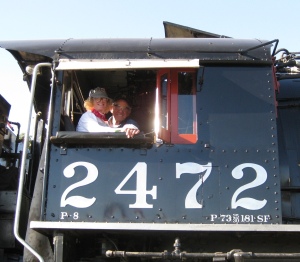 Besides railroads, what fuels your writing? Coffee, tea, or beer? With cake or pizza?

Coffee, tea and beer are all beverages found in The Engine Woman’s Light. Scotch Whisky plays a small but vital role. No pizza though, and only a single—yet ominous—cake.

Who was your biggest help in writing this story – publisher, cover artist, editor, spouse, child, parent – and why?

My husband, David, deserves the “biggest help” award. For twenty years, I wrote. For the first fifteen, he proofread, served as a sounding board and accompanied me on research expeditions. This novel never would have happened without him.

About The Engine Woman’s Light –

Spirits watch over Juanita. But who is she? A mystic in love who holds life sacred? Or a ghost-possessed railroad-saboteur?

A mystical vision of an airship appears to fifteen-year-old Juanita. The ethereal captain commands her to prevent California’s thrown-away people—including young children—from boarding trains to an asylum. That institution’s director plots murder to reduce the inmate population. Yet to save innocent lives Juanita must take lives of the corrupt. How can she reconcile her assignment with her belief in the sacredness of all human life? And will she survive to marry her betrothed?

Juanita sets out despite inner trepidation to sabotage the railroad. Her ancestor Billy guides her. Then bit by bit, she discovers the gut-wrenching truths all of her ancestors neglected to reveal.

Come visit Juanita’s world—an alternate nineteenth-century California—where spirits meet steampunk, where both love and anger emanate from beyond the grave.

A curtain of darkness hung behind manzanita bushes and poison oak, ten or fifteen feet above me on the hillside. This had to be the opening I’d detected the day the council met. The threshold to the Cave of Light.

I edged upward, prickly brush scraping my arms through the sleeves of my ankle-length tunic. Some types of Indian spirits stayed with their bones instead of going to the Shadow World. The spirit of the Yokut shaman’s bones in the cave ought to know where that magic letter was, plus how to reach it without encountering malicious spirits or falling down a shaft. If the crumbling path didn’t give way beneath my sandals, I’d soon learn the truth.

The truth… My people had accepted the Shadow World’s mission to sabotage an asylum train by summer. Promise would continue to exist. But where? I glanced heavenward. Sunset dressed the western sky in muted pinks and grays, as the waning moon’s pale outline slipped behind multicolored clouds. Each truth had its own time of discovery.

My empty stomach gurgled. Supper time was an unavoidable truth. Papa and the others would have noticed my absence by now. The way here from Promise was too steep and treacherous to dark-walk, particularly with quarter moon only five days away. No one could do anything before dawn about my disobedience. I had until after sunrise to find the letter.

A ledge jutted from atop a granite outcrop, rather narrow and mostly cloaked by chaparral. The ledge led to a deep indentation in the hillside. One step. Two steps. My destination was almost within reach.

Still, a lonely being of bones might desire my company for eternity. Locating the shaman’s skeleton might not be the best thing. My stomach muscles tightened as I found the next foothold.

I squeezed behind scratchy bushes, then stretched my arms high. I pushed off the hillside with my feet and pulled myself onto a shelf of smooth, gray rock. An opening in the hillside waited. I snaked on my belly into a dim, rocky passage, the ceiling too low for standing. Somewhere, water dripped. So far, no spirit lights or skeletons were in sight.

Within a few feet, the passage opened into a chamber several times my height. I maneuvered into a sitting position. No blue-green light shone. Only the faint daylight from outdoors. Dusk drifted toward night. I could explore little farther until sunrise. I’d hoped for an obvious clue. Had I come to the wrong place?

My stomach rumbled, louder than before, although I’d eaten nuts, acorn bread and herbal broth for breakfast. I usually fasted longer, one full night and day, before visiting spirits. A taboo broken. My transgression could offend the shaman’s spirit. Still, I’d only eaten with the community this morning to mask my intention of coming here. I had the will-power to sacrifice comfort for duty. A serving of mashed beans, however, would have tasted wonderful right then.

I scanned the shadows of the cave, my eyes adapting to darkness. If only I’d brought a lantern. Perhaps I could explore this chamber anyway. Not a good idea. Vertical shafts to lower chambers could ensnare me. The Voice of the Light—the Virgin of Guadalupe?—could only try to help. I should invoke the spirit of the shaman’s bones.

“Dearest shaman,” I called as I faced the cave’s dim interior. “The Shadow World has bid me to come here. May I trouble you to assist me?”

I introduced myself, in case he’d forgotten the little girl who’d loved his mint and berry tea years ago. The night breeze rustled through unseen leaves outside the cavern. I repeated my request six more times, a total of seven. A strong number. An owl hooted. Not even a mysterious hoot. My chest heaved a deep sigh. All this evening’s efforts had been wasted.

A wind arose outside. A chill cut through me. I crawled several feet into the cavern and curled up on the floor. Warmer now, I yawned. Should I sleep? The shaman’s spirit might visit me in a dream and tell me what to do next.

From the darkness came a soft, repetitive high-pitched knocking. I tensed. Rattlesnakes preferred to slither about in daylight, but one of them might call this cave home. I’d better not move.

A shuffling sound led to another rattle. An eerie blue-green glow—a fist-size ball of light—swayed within the cave. The orb, maybe thirty feet away, divided into twin spheres and drifted closer to me. Glints of ivory triggered a tingling sensation in my fingertips and toes. Bones could rattle. Ivory was the color of bones.

Two clenched rows of teeth wobbled in the air. A death head gleamed. Blessed saints, the blue-green radiance came from eye sockets. Human eye sockets. In a skull, attached to a human skeleton. Oh, dear Lord of this world and the next. The being approached, rattling, arms by its sides, mouth frozen in a horrific grin. Strips of rags dangled from its hips. The beams turned deep blue. I couldn’t move, cry out, do anything but widen my eyes. I was awake and not in the Shadow World. The dead walked the earth in more than spirit form.

A spirit capable of holding a heap of dry bones together must possess great mystical powers. Powers strong enough to hold me captive for the rest of my life. Run—I needed to stand and run. I tried to rise. Two bony hands reached out and clamped my wrists. The skeleton pushed me against the ground and dragged me deeper into darkness.

My cry echoed as the skeleton pulled me across the cave’s bumpy floor. I twisted my body but couldn’t break free. 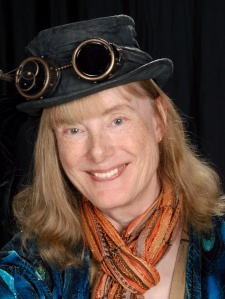 Laurel Anne Hill grew up in San Francisco with more dreams of adventure than good sense or money. Her close brushes with death, love of family, respect for honor and belief in a higher power continue to influence her writing and my life. During the past twenty-three years, she’s had two novels, thirty short stories and a variety of short nonfiction pieces published. Her first novel, Heroes Arise won a ForeWord Magazine Award (Bronze, Science Fiction). Several of her short pieces have also won awards. She continues to serve as a panelist and writing workshop mentor at science fiction/fantasy conventions. Laurel is a writing contest judge for Horror Addicts, California Writers Club, and The San Mateo County Fair. More at http://www.laurelannehill.com

2 comments on “Riding The Rails”

This entry was posted on February 6, 2017 by kathybryson in Guest Authors and tagged California history, ghost story, portals to the spirit world, railroads, spirit world, Steampunk.