I’m not the best photographer around, so I was pleasantly surprised to see by a couple of pictures of my kitties that turned out particularly nice. In fact, I’d even go so far as to say they resembled masterpieces!

also known as Gerard Dou and considered one of the classic Dutch masters of chiaroscuro or the play of light and dark.

Sleeping in winter sunlight on the couch 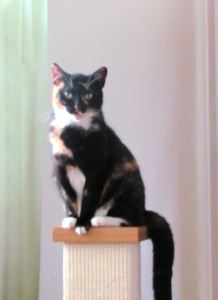 Why, yes, we were gods in Ancient Egypt. Thank you for remembering.

This entry was posted on December 10, 2015 by kathybryson in Everything Else and tagged ancient Egypt, cats, chiaroscuro, Dutch Masters, Gerard Dou, humor, oil painting, sculpture, statue.