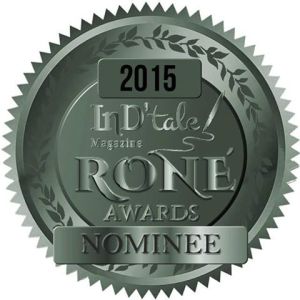 This week, Lauren Linwood stops by to talk about competition and perseverance, as well as share a sneak peak at her RONE nominated book, A Bit of Heaven on Earth. Check it out below and don’t forget to vote!

Today’s youth get the tag “Trophy Generation,” thanks to the awards they rack up from athletics to sports. Just for showing up, kids receive trophies taller than they are, which are quickly snatched up by their helicopter parents to be proudly displayed in a prominent place.

My generation was different. The principal passed out a few ribbons to the winners on Field Day, and I certainly wasn’t one of them. My mom still jokes about how I was actually doing pretty well in the 100-yard dash in first grade when I paused, waited for my best friend, and crossed the finish line with her—dead last—but holding hands.

I did claim a few certificates for academic achievement that were lost or misplaced long ago. I was named Most Likely to Succeed by my senior class, but other than a page in the yearbook, I didn’t even get a pat on the back!

As I moved through my adult years, I felt blessed to be recognized as the Teacher of the Year at both high schools where I taught, and the highlight of my year was the day before graduation when seniors delivered handwritten letters to teachers who had influenced their lives in a positive manner. No award could mean more than the words on that page.

But I’d been in love with words on the page for many years. I’d written a novel back in college and when I graduated, I planned to teach by day and write by night. LOL! Lesson planning, meetings, parent conferences, and the endless stream of papers to grade made that impossible. Add to the mix a husband and daughter to raise, and writing sat on the back burner for many years.

Yet stories simmered in my head. I finally did something about that. I began writing again. I met my editor at a conference, and the sweetest words to my ears occurred when she said of the medieval romance I’d just pitched her, “Send me the full manuscript.” Not a partial. Not a hundred pages. The entire enchilada, baby!

That manuscript, Music For My Soul, along with my second book, a western historical named Outlaw Muse, qualified for the RONE Awards in 2014, sponsored by InD’Tale Magazine. These awards honor the best books in indie and small publishing, based upon their strong reviews. The public votes on the nominees, with the highest number of votes allowing a novel to progress to the final round. Industry professionals read these books, and the top scoring books in each category win the RONE.

I didn’t garner enough votes last year to move on to the judging round, but I’m thrilled that all three of my books published last year qualified for the 2015 RONE Awards this year. My two western historical romances, A Game of Chance and Written in the Cards competed against each other in the American historical category the first week of the competition. Unfortunately like the presidential election, I could only vote once. It was hard for me to choose between my two book babies! 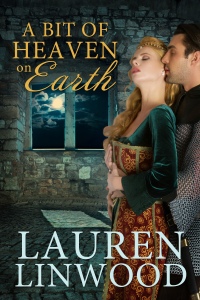 This week, my medieval historical romance, A Bit of Heaven on Earth, is eligible in the Historical: Pre-Medieval category. Thanks to Kathy, I’m sharing an excerpt from Gavin & Elizabeth’s story with you today. If you have a chance, consider giving it your vote any time between May 11-17!

When Gavin of Ashgrove and his closest friend are captured in a fierce battle during the Hundred Years’ War, their captors demand a hefty ransom from their fathers for their return. Robert is quickly set free, but Gavin’s father refuses to pay for his son’s release, leaving him to rot in a squalid French prison. Aided by a sympathetic priest, he escapes and returns home to England, only to find he has been proclaimed a bastard and disinherited.

With nowhere to turn, Gavin journeys to Kentwood, where he fostered as a boy, hoping Lord Aldred will take him on as a knight in his guard. The old warrior is close to death, but he soon realizes Gavin is his son. Aldred plots to have Gavin inherit Kentwood and marry his much younger wife, Elizabeth, a famed and opinionated beauty who remains a virgin after a decade of marriage.

Will the king recognize Lord Aldred’s first request of a marriage between Elizabeth and Robert, uniting Robert’s estate with Kentwood—or will the temperamental Edward reward Aldred’s years of service and honor a dying man’s final request?

Elizabeth watched as Gavin built a fire. She moved close to it, resting her hands against the stone as she leaned into the heat.

“You shake still.” He moved behind her and placed his hands upon her shoulders. His fingers held such heat. Indeed, his very closeness seemed a stronger fire than that in the grate before her. She leaned into him, absorbing the warmth that he possessed, even in his wet tunic.

Then his arms slid round her waist, drawing her closer. Her breath caught in her throat at his very nearness. His fingers locked, trapping her in the circle of his arms.

“Gavin?” she asked, afraid to move, afraid to break the magic spell. She’d longed to be right where she now stood. Her pounding heart betrayed her fear at their situation.

His response was wordless. He bent and kissed her ear, his breath sending shivers down her spine. His lips moved to her neck, scorching a path there, before they touched her cheek.

One arm held her tightly against him as his other palm moved to caress her breast. Elizabeth moaned. Her knees turned liquid. If Gavin had not held her, she would have puddled on the floor.

Suddenly, he spun her in his arms. She clung to him wildly. His hands splayed along her back. His mouth was everywhere, in her hair, on her eyelids, her cheeks, the tip of her nose, her mouth.

His kisses overwhelmed her. She couldn’t breathe. And yet they continued, his mouth insistent on hers. Her lips parted, allowing his tongue entrance, and she welcomed it. He stroked her with it, a constant, dizzying motion that kept her head spinning. Her senses filled with him, his scent, his touch, his taste. Tears began to flow.

Gavin lifted his mouth. “Elizabeth?” he asked. “Have I hurt you?” He held her at arm’s length and studied her.

He smiled, a heartbreaking smile, and caught her up in his arms again. “No, my love, you are the beautiful one.” He kissed her gently, tenderly. The passion was still there, but it was more controlled now.

Gavin swept her up into his arms. Hers went round his neck and she kissed him for the first time, making her own bold move. His growl let her know he approved. He broke the kiss and looked around the room.

“I see no bed, my lady. The straw on the floor ‘twill have to suffice. But,” he said, his eyes glowing at her, “I guarantee you won’t notice the difference.”

He carried her to the corner of the room. As he placed her on the straw, she raised a hand to his chest. His heart beat as fast as hers did. Oh, God in Heaven, she wanted this man!

A voice from outside invaded her thoughts.

“Elizabeth? Gavin? Are you there?”

Lauren Linwood became a teacher who wrote on the side to maintain her sanity in a sea of teenage hormones. Her historical romances use history as a backdrop to place her characters in extraordinary circumstances, where their intense desire for one another grows into the treasured gift of love. Her romantic suspense novels feature strong heroes and heroines who unite to defeat a clever antagonist and discover a deep, abiding love during their journey.

A native Texan, Lauren lives in a Dallas suburb with her family. An avid reader, moviegoer, and sports fan, she manages stress by alternating yoga with long walks. She plans to start a support group for House Hunters addicts—as soon as she finishes her next piece of dark chocolate.

2 comments on “The Deciding Factor”

This entry was posted on May 11, 2015 by kathybryson in Guest Authors and tagged A Bit of Heaven on Earth, A Game of Chance, competition, historical romance, InD'tale RONE Awards, independent publishing, Lauren Linwood, Written in the Cards.