A Tale Of Two Holidays 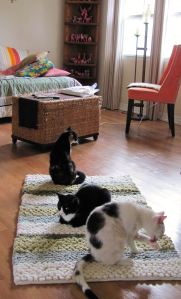 The world’s a stage…

The past week, we celebrate Christmas at my house. However, there were two distinct holidays going on. Looking at the pictures, you’ll see the cats’ experience. I watched them carefully because the white cat, Pierrot, is still relatively new, but you can see for yourself how it went.

I spent the holiday writing. Book 3 has developed to the point where I’m no longer writing notes or ideas, but the characters’ thoughts and actions. I have to go back now and add that feel to the earlier chapters. I took a class once by Elizabeth Peters, where she described the process as “larding.”

Stretching before the performance

Larding, while generally something you want to avoid over the holidays, is the process of adding extra fat to make a dish richer. Peters described working saved bacon fat into a meatloaf with her fingers. In a book, it’s where you go back and add details like what characters are wearing or catch phrases. You can also lard in descriptions of places or things. You make your story richer by adding in extra reactions, what people felt and heard and saw in addition to what they said or did.

Last check before going on stage

Adding detail does much more than add to the richness of the story. This is also the point when I know enough about what’s going to happen that I can start to add foreshadowing or set up the punch line for the joke that will follow. This is where I start to rewrite. Having gotten a feel for who the character becomes as the book progresses, I can now go back and change the original descriptions that weren’t quiet right or actions that were headed in the wrong direction. This is the part where I actually start moving chapters around to get the flow of the story correct and ensure the pacing of the story leads up to the climax without being rushed or dragging.

a one and a two and everyone, power nap!

Everyone has a different process, but I need quiet to concentrate. Thinking through what I want to say takes the most effort, so sometimes one new paragraph can be harder than a whole previous chapter. The holidays are the perfect time to do this. Two weeks off and no interruptions! Well, except of course Christmas and I went to see the new Night at the Museum movie with a friend. Oh, and I did get the compost to start prepping the garden for spring. It’s in the back of my car. But other than that, it was a good start for everyone for happy, healthy, and productive new year to come!

2 comments on “A Tale Of Two Holidays”